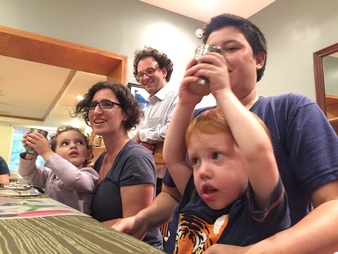 A Reconstructionist approach to Judaism sees Judaism as more than merely a religion or a culture but rather as an evolving religious civilization. As Rabbi Mordecai Kaplan, the founder of Reconstructionism, taught: Judaism has always changed to meet new challenges and new paradigms. As Jews and allies in the modern era, we have the opportunity to participate in the ongoing evolution of Judaism, learning from and building on the past while also making changes and adaptations when our tradition conflicts with values of pluralism and equality.

A Reconstructionist approach to Jewish tradition honors ancient traditions and practices and honors creativity in adapting new rituals or breathing life into new traditions. Reconstructionist Judaism encourages taking torah and sacred texts seriously, even if we don’t necessarily take them as the literal word of the Divine. Torah study thus becomes a wrestling with the text and an effort to apply the texts to our own contemporary lives or to the struggles we face as individuals and a society.

Reconstructionist congregations like Kol Tzedek encourage a plurality of voices when it comes to understanding the Divine. Many Reconstructionists, including Kaplan, reject the idea of a supernatural being who controls the universe but still believe that there is a spirit that fills the universe. Some Reconstructionists take instruction from the Jewish mystics, tending toward a more pantheistic understanding of God as in everything, permeating all life. In all cases, it is not important that you believe or even what you believe, rather that you are thinking critically and being spiritually open.